This post focuses on reported assistance on consumers’ credit records. For purposes of this analysis, we define consumer assistance as an account being reported with zero scheduled payment due despite a positive balance. In the August 2020 report, we found that most credit products saw a sharp uptick in assistance in March 2020 and an uptick in transitions out of assistance between April and June. Since July 2020, consumers have transitioned out of assistance to varying degrees across all credit products, but a significant share of mortgage borrowers continue to receive assistance.

As in the first post of this series, we use the Bureau’s Consumer Credit Panel (CCP), a deidentified sample of records from one of the three nationwide consumer reporting agencies. We focus on month-to-month transitions in assistance: loans that were reported with scheduled payment due in one month and no scheduled payment due in the next month despite a positive balance. 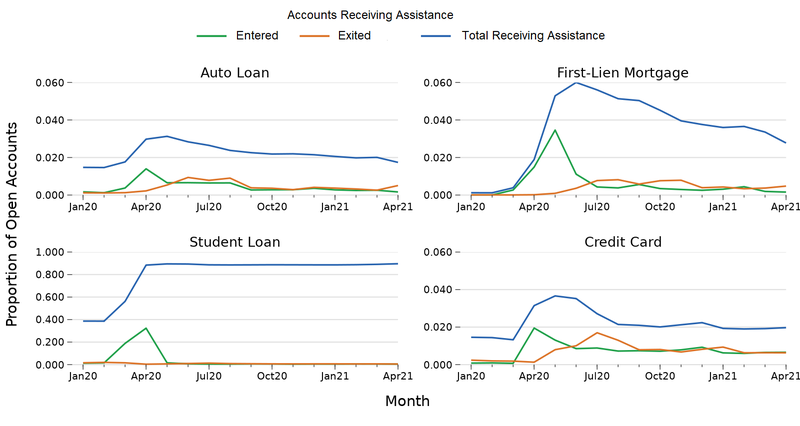 A substantial body of research has shown that some communities have been disproportionately affected by the health and economic shocks of COVID-19, and we anticipate those same disparities will be reflected in the likelihood that different groups receive and lose assistance. In the August report, we found that majority Black census tracts, majority Hispanic census tracts, older borrowers and borrowers in counties hit hardest by COVID cases and layoffs were most likely to receive assistance in the early months of the pandemic. This pattern has continued through March of 2021 (not shown). There is also substantial variation in which groups have exited mortgage assistance gained during the pandemic. In the analysis below, we focus on mortgage assistance, though in the August report we showed that patterns of assistance are relatively consistent across loan types. 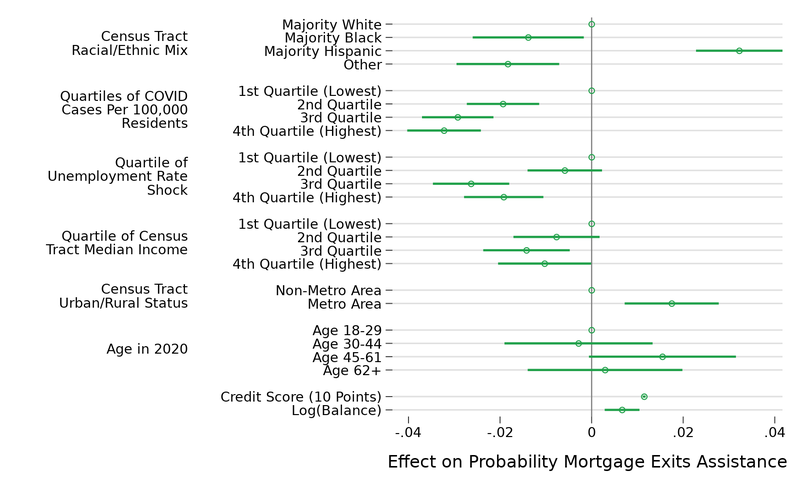 In the figure above, we report the estimates of the probability that different populations of mortgage borrowers transitioned out of assistance they had received during COVID-19, holding other characteristics constant. For the categorical variables, the plotted points represent the average difference in probability that an account in that category transitioned out of assistance as compared to a reference category (indicated by a point at zero), holding all the other factors constant (see the August report  for more details on the methodology behind this figure).

The first post in this series showed that delinquencies have been low throughout the pandemic, and the high rates of payment assistance, as documented in this post, are likely at least partly responsible. As the assistance from programs such as the Federal CARES Act ends, the risk of reported delinquencies and even foreclosures may rise. To ensure a smooth and orderly transition out of the widespread payment assistance available during the pandemic, the Bureau recently finalized a rule establishing temporary special safeguards to help ensure that borrowers have time before foreclosure to explore their options, including loan modifications and selling their homes. In the next post in this series, we will examine trends in consumers’ use of credit cards during the pandemic.