The CFPB released the Outline of Proposals Under Consideration and Alternatives Considered this past July describing rules it may implement to be followed by all debt collection entities. The CFPB then announced this 70-page outline would be scrutinized by a panel of third-party collection establishments 28 days later in accordance with the Small Business Regulatory Enforcement Fairness Act (SBREFA). Among the collection professionals chosen to provide suggestions on behalf of the debt collection industry was Kelly Knepper-Stephens, general counsel and chief compliance officer at Stoneleigh Recovery Associates.

“My written response alone was 43 pages,” Knepper-Stephens said. “Every couple of pages I had recommendations. I had two or three recommendations, at least, for each rule.”

“I had a lot of numbers about how some particular regulations would impact my business,” Knepper-Stephens said. “For example, for the proposed written authorization requirement before you can take a payment on an out of statute debt, I brought data showing that when I send something out to a consumer for their written acknowledgement, I only get four back for every 15 I send out. I have a nonresponse rate of 73%. If I have the same response rate and if I’m not allowed to take a payment unless I have written authorization, then under the proposal, 73% of the time I’m not going to get a payment when I otherwise would have.

“We also came with solutions, ways to change the rule that would still meet the CFPB’s goals and obligations to protect consumers’ rights and interests but also allow small businesses to continue to exist. We came with suggestions across the board for almost every proposal the CFPB had.”

Not only did Knepper-Stephens and company’s presentations make requests for clarity but also for exactly what it is a collection agency or law firm can say or write to a consumer. The panel, as well as the rest of collection professionals, urged the CFPB to provide precise words that can request payment while being safe from legal repercussions. This has been fueled by the CFPB’s tendency to provide tools advertised to keep an agency safe from legal action yet still leading collection professionals into lawsuits; such as a collection letter the CFPB provided.

“I looked at the letter. I think I found at least five places where there were problems in light of existing cases and existing language that courts require to be on letters,” Knepper-Stephens said. “For example, an account that they chose for their sample validation letter is an interest- bearing account. But their isn’t any interest language anywhere in the letter. There’s a new case in the second circuit, there’s a seventh circuit case as well, that talks about if the balance is going to change because interest is occurring on the account you need to tell the consumer that. The CFPB didn’t have that language on the letter. The question for the CFPB is: Are they purposefully leaving that language out? Is that a choice? If we use that letter are we safe from lawsuits even though it doesn’t have that interest language on it? Did they forget it?”

Though the preparations for the panel were immense and the quantity of recommendation for the outline great, it was the hope of every SER present that this input would not fall on deaf ears. The proceedings were dictated by law so it was the fear of many that the CFPB’s attendance was merely the signing off of a requirement and nothing more. Fortunately, it appeared to Knepper-Stephens as if the CFPB representatives came ready to listen. 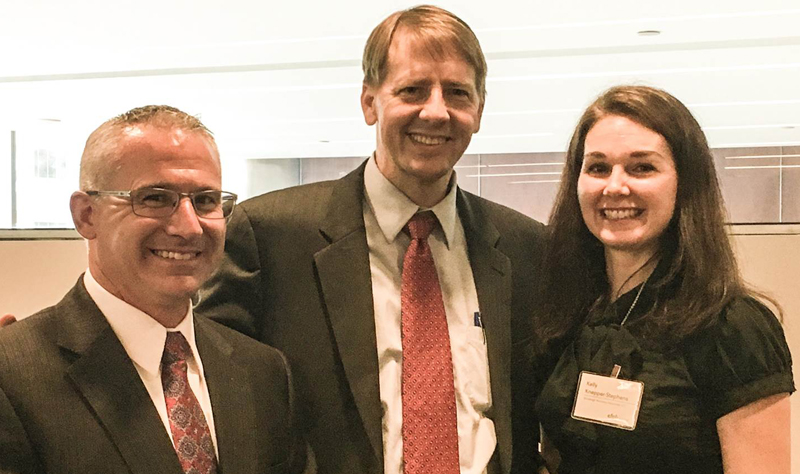 “I thought they were very receptive,” Knepper-Stephens said. “On the panel for the CFPB were Kristin McPartland, Dan Sokolov and John McNamara. John McNamara was a member of our industry before he joined the CFPB. I found that they have always been very open and eager for information that I hope they use to help create a balanced rule. I definitely felt like they were pleased that we had come prepared with a significant amount of data and information about each section of the proposal that we found troubling.”

CFPB Director Richard Cordray stated in his remarks for the release of the outline, “We also plan to address first-party debt collectors soon, but on a separate track.” Amidst the efforts to help make a workable set of rules through the recommendations of the SERs, Knepper- Stephens felt productivity could have been increased greatly if first-party representatives were present at the panel. The relationship of creditors and third-party collectors is largely entwined. An ideal collection scenario involves actions being taken by the creditor with the third-party in mind and visa versa. Taking recommendations for the outline from third-party without first-party present could possibly nullify progress if first-party were to have a conflicting opinion.

“I wrote 43 pages on how I think their proposal is going to impact my business,” Knepper-Stephens said. “If the first-party creditors say something that I wasn’t anticipating, it very well might change my answer. That’s why I have been very concerned and asking, ‘Where are the creditors, why aren’t they here and what are you guys going to do about it? I am concerned about the small business creditors not being here to comment and how their comments will likely impact or change my answers.’

Knepper-Stephens seems to hope most of all that the communication between the CFPB and third-party collectors continues and the progress does not stop after the SBREFA panel.

“I think the CFPB is trying to figure all that out,” Knepper-Stephens said. “I hope they are willing to continue to have a dialogue with the SERs who served at the last panel and perhaps solicit feedback from them again once the first-party rules come out.”

Of course the best preventative measures are proactive measures. Had a meeting or panel of some sort with the CFPB and third-party collectors been held before the rules were released, collection professionals might not have felt such a sense of regaining lost ground. Even establishing a mutually understood language would have laid a strong foundation for an effective set of rules.

“I do wish that before they had come out with this outline they would have at least presented it to folks at ACA International, DBA International, the CRC [Consumer Relations Consortium], and NARCA,” Knepper-Stephens said. “Perhaps they could have avoided the larger problems that they didn’t see. For example, using the term “default.” Across the board, everyone presented that using the term “default” is just problematic. I think the CFPB chose the term “default” because it’s a word used in the FDCPA; but it’s not defined in the FDCPA. There has been a significant amount of litigation about that.”

“I don’t think there is any reason why they [collection professionals] should keep silent,” Knepper- Stephens said. “If they have comments and thoughts about the proposed rule, I think they should reach out to the CFPB rulemaking team and provide them with information. The CFPB has been very open about trying to reach out to industry members or industry associations. If you put something together to send to the CFPB, you should also send it to your local Congressman.

“Unfortunately because of a couple bad actors in our business, there is a bad perception about us. We need to actively end that perception and turn it around so folks realize we are great businesses. We keep the economy running.”

Collection professionals can identify and contact their representatives by visiting the following websites: